I'm really proud of my mum and dad for bringing us up bilingual. It must have been pretty hard work.

My brother and I were born in London, my dad's Spanish but my grandparents moved to London in 1960 so he's bilingual too. My mum started learning Spanish when she met my dad and she has afforded us a great many laughs over the years as she's continued to perfect her grasp on the language.

When we lived in London, they always tried to talk to us in Spanish at home and then reversed their policy when we moved to Madrid. We spent every summer in Spain with my grandparents and I sometimes came on my own for Reyes (double the pressies, double the fun!!). When we moved to Madrid we'd visit my family in the UK once or twice a year (HMV, Virgin, Waterstones, Boots, Topshop!!), although we never did holidays... I mean, Christmas in York is nothing like summer in Alicante!!

My voice is distinctly different when I speak Spanish and English. I once spent a month in Spain as a kid when my mum was too pregnant to travel for the summer. I didn't speak a word of English over that time as I spent the days playing with my Spanish grandparents and my Spanish friends. I would not speak English when I got back. My playschool teacher called my mum to tell her I could understand everything that was going on but kept talking to all the other kids in Spanish. Years later I spent a month in Paris at the Sorbonne speaking only French or English, I came home and realised I hated the sound of my voice in Spanish. I think that was also what happened to me as a child, although I probably didn't know it at the time.

When it comes to names, there's also a clear difference. My parents decided on names that would work in both languages. Hence 'Laura'. My brother was going to be 'Daniel' for a whole 9 months of planning and baby names. The day he was born my dad decided to scrap all that and insisted on having my brother continue his name. Enter 'Javier'. My entire UK family (mum included) let out a groan. My mother was always 'mummy' when we were kids, she's now 'mamá'. My brother has always been 'Javs' (pronounced /habs/). My father is 'papá', he has never been and will never be 'dad' or 'daddy'. He hates it.

Things are different with my brother, we're terrible. We use a horrible combination of Spanglish, not so much in that we pepper English sentences with Spanish words or the other way round, it's more a case of chopping and changing from one language to another in each sentence. E.g. "Vas a ver el partido en casapadres? Yo sí. BTW, I checked out that bluray you said they wanted for Xmas" and so on and so forth. Truly terrible, and a very bad example for everyone. Although it gives our friends loads of comic material when it comes to taking the mick.

Do you come from a bilingual background? How do things work in your house?

Email ThisBlogThis!Share to TwitterShare to FacebookShare to Pinterest
Labels: languages, me, myself and I

Tonight I'm going to be watching my all-time favourite film on the big screen. I recently came to the conclusion that it was my all-time favourite film when I got a little bit too carried away about being able to watch it again in a theatre. Plus I also realised you can't be 35 and expect people to take you seriously when you say Heathers is your favourite movie, or that you can't decide whether The Breakfast Club, The Lost Boys or The Goonies is the better film (it's The Lost Boys, I mean, come on, there's vampires, there's a comic book store and there's the two Coreys).
Although I don't know how valid it is to say The Shining is my favourite film when I don't really understand the ending!! I've read long studies about the film, overanalysing it frame by frame, taking a deeper look at every tiniest little detail, but that still doesn't make things any easier. Thanks, Stanley.
Still, I'm not about to go into the magic and horror of room 237 (or 217 if you're going by the book, which is another masterpiece in itself) because this post does actually tie in with languages!

I watched the film for the first time when I was 12 years old. I'd sometimes stay over at a friend's house and her older brother would go to the video store and rent horror movies for us to watch. We were in Spain at the time which meant the video store only had dubbed versions of the films. I still remember to this day how we popped the video in the VCR... and spent the next 142 minutes laughing our heads off. We actually spent the rest of the evening pretending to be Jack Torrance. What made the film totally laughable was the ridiculousness of the Spanish acting, particularly the voice of the actress chosen to play Wendy and the weird choice of swear words used in the translation, which were limited to variations on joder. We may only have been 12, but even then we knew that Spaniards rely on a selection of mierda, me cago en la leche, puta and other colourful expressions apart from the omnipresent joder.
When I got back home, my dad asked about my weekend and was blown away by the fact that we'd laughed through the film.
About a year later, we went to London to visit the family and he decided to buy a copy of The Shining to watch at home. I sat down to watch it with him, with all the cockiness of my teenage self and got pulled into the film, no language distractions, all Jack Nicholson in all his glory. I absolutely loved the film and I was completely petrified!!
I didn't sleep for a month afterwards.

Kubrick was a control freak. I know he came to Spain to supervise and handpick the voice talent that would be portraying the actors in the movie. To this day, I still cannot understand what made him choose Verónica Forqué and I do not know a single person who does not find her ridiculous in the film.

That said, and although I didn't realise it at the time, my little bilingual brain was certainly aware of the importance of languages, dubbing... and swearing!

Now, if you'll excuse me, Grady is waiting to show me to The Overlook's private cocktail bar. 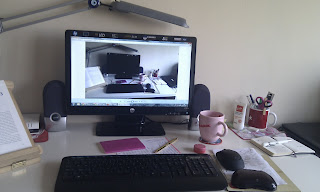 My desk on a tidy day
This is what my desk now looks like. Up until a few weeks ago I used to toil away happily on my laptop. That all changed dramatically one morning thanks to my oh-so-loveable dog, Nara (believe you me, she is going to be a fixture on this blog).

I must say that I had been considering buying myself a screen, the laptop keyboard I can handle (in fact I'm still breaking in my new keyboard, and I'm always pressing the wrong keys, particularly when it comes to Spanish accents), but I had started to give some thought to getting myself an extra screen for proofreading or for browsing sites whilst translating without having to split the screen up into a million pieces.

My morning ritual usually involves catching up on a half-hour tv show over breakfast and the morning papers. Nara is usually chilling on the sofa behind me, worn out after our morning walk, but she sometimes jumps up to snoop around or to bring me a toy to play with when she thinks I've been typing away for too long.

Since I'm pretty much the Bridget Jones of translators (more on that in future posts), Nara jumped up, nudged my elbow, my elbow jerked my hand, hand jerked the spoon, laptop lapped up my cereal. Delightful way to start the morning.

Cut to me frantically backing up my files (I regularly back up everything, but just the thought of losing something makes me panic!), watching milk pour out from under the keyboard and then wrecking the keyboard as I tried to pop the keys back on the keyboard after prying them out not in the most expert of manners.

After powering up my 10" screen netbook and proofreading and handing in a text that I had thankfully translated the night before on my 16" laptop, I set off to kit myself out with a screen and keyboard. I went for a 20" screen and a wireless keyboard and mouse because although I'm messy by nature, I get a bit claustrophobic when my desk is too cluttered and I didn't want the extra cables getting in the way of all the pencils, pens, mugs and other stuff that I generally litter my table with.

I'm really happy with the change. I'm the kind of person that learns the hard way, so I really do thank Nara for nudging me towards changing my set up.

Photo breakdown: keyboard, mouse, wrist cushion, pink notebook (my current "word jotter," I have countless little notebooks that I jot down words, expressions, terminology in. I know this is incredibly old school but I find that writing them down makes them stick in my brain, I do use excel for "official" glossaries though), speakers (I could not live without my music), book stand (I work from converted pdf files, but like to keep the book close at hand for quick reference), chapstick, hand cream, day planner, and lots of little flannels that I brought back from my summer trip to Japan and don't really know what to do with but are too cutesy to throw away.
Posted by LauraFF at 09:55 No comments:

Oh, but haven't things changed since then?

Back then I was already working as a freelance translator (I've been at it since around June or July of the year 2000), I'd just finished an 8-month stint at the Spanish Foreign Affairs Ministry during Spain's EU Presidency in 2002 and I had just met Virginia, who is now one of my best friends, at the UN translation exams they held that year in Madrid. Neither of us passed the exams, I wasn't even sure if I wanted to work for the UN, but I'm so glad I sat those exams or I would never have met her.

She was a keen blogger at the time. I'd never even heard of blogs, but I soon got caught up in the whirlwind. I loved blogging, I'd ramble on about almost anything and everything, but mainly gigs and tv shows. My blog also worked as a diary, I'd use it to talk about the important things that went on in my life.

It was also a great way to keep in touch with people. My brother was living in London at the time, and he used to say that he loved tuning in for his daily instalments of my life!

This time I've decided to make things a tad more professional. I promise to not get lost in breaking down the characters on my favourite tv shows or meticulously analysing the tracks on my favourite album of the week, but then again, this won't be strictly about translation. After all, I'm not cut out for being all about business.

All those things that we translators face day in and day out as we type away.
Posted by LauraFF at 16:09 1 comment:

Email ThisBlogThis!Share to TwitterShare to FacebookShare to Pinterest
Labels: introduction, me, myself and I, translating
Newer Posts Home
Subscribe to: Posts (Atom)